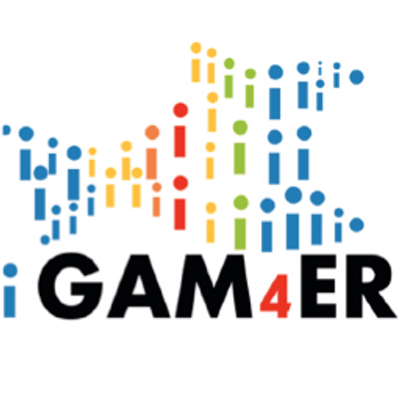 Why do e-fanorona fit into this competition?

Apart from the cultural aspects of e-Fanorona, the Fanorona concept in itself involves a lot of mathematical concepts – especially decision tree algorithm.

The challenge for Nelli Studio while implementing this board game resides into the implementation of artificial intelligence so that the player can have three levels of difficulties when he wants to measure himself against his smartphone (or tablet).

On the other hand, a special thought have been integrated so that visuals are appealing while confirming Nelli Studio’s aim to promote malagasy culture.

Fanorona is a malagasy (from Madagascar, the island, not the movie) traditional board game similar to chess.

There are different flavors of Fanorona -requiring different algorithms. As an example, the usual « Fanoron-tsivy » that is implemented into the e-fanorona app requires both players to start with 22 pawns. However, with the « Vela » rule (also implemented into the e-fanorona app), the second player can only start to « eat » his opponent’s pawn once the setting goes back to 22 vs 5 (22 pawns for the first player and 5 pawns for the second one)- this makes the game a lot more interesting.

Mobile devices have become part of most people’s daily lives. Nelli Studio is making the challenge of bringing traditional malagasy board game to a brand new set of users.

Nelli Studio value the cultural dimension of the games it is developing. The user will notice the reference to malagasy culture all along the game. Moreover, the efanorona team is mainly composed of malagasy technicians and creatives.

Being a mobile game development studio, Nelli Studio have developed the e-fanorona project on mobile devices (smartphones as well as tablets). We specifically have developed a version for e-Fanorona for two major mobile platforms: Google PlayStore and AppStore. Feel free to download the version that fits to your mobile device.

Fanorona is a a Malagasy ancestral game that is still practiced by Malagasy people nowadays. It requires memory aptitudes as well as strategy thinking that we usually find in games like Chess.

Through this project, we want to answer the following questions: can artificial-intelligence-based efanorona application beat human champions of Fanorona? Can the e-fanorona project find new winning-strategies that practitioners of traditional Fanorona haven’t experimented yet?

Through the e-fanorona project, we want to create a similar experience to the famous human VS Computer Chess challenge opposing Garry Kasparov VS Deep Blue (http://en.wikipedia.org/wiki/Deep_Blue_versus_Garry_Kasparov)

There are few differences worth mentioning though:

– Fanorona has a whole different set of rules that make it a very challenging concept to implement when it comes to Artificial Intelligence.

We assume that champions of traditional Fanorona have a lot of experiences as well as winning-strategies they trust on.

We also assume that the smartphone or tablet where the e-fanorona project is installed have enough computing power so as to fully implement the artificial intelligence part of the project.
Materials needed

Procedure and rules of the Fanorona game:

The “Fanoron-tsivy” starts with 22 pawns for each opponent. An player wins the game when his opponent has no pawn left.

One can only move following the lines, however, one cannot move to the same direction twice, and one cannot go back to a position where one have already been for the same/continuous move/combo

There are two ways for “eating”: either by approaching, or by “leaving”. Opponent’s pawn can only be eaten altogether if they are contiguous.

– Fanoron-tsivy: the board is composed of 9 columns. Each component start with 22 pawns and both can start “eating” his component’s pawn from the beginning. This is the game setting where we introduce Artificial Intelligence

–  » Vela »: this is the same setting as with “Fanoron-tsivy” with the major difference that the second player who plays the Vela can only start “eating” his opponent’s pawns when he’s only left with 5 pawns while his opponent still has 22. Although an extension of the Artificial Intelligence part of e-fanorona, we haven’t yet implemented it.

Territory : is the number of positions that can been controlled by a pawn. 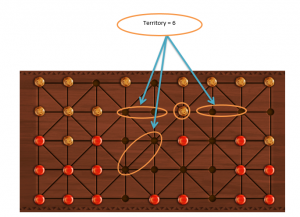 Liberty : is the number of positions where a pawn can moove safely 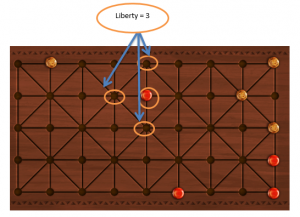